James O’Flynn and his band The Claddagh Rogues have battled their fair share of demons to consistently produce passionate music rooted in their troubled lives. The Claddagh Rogues were born out of an artist-in-resident project at Cork’s Simon Community in 2007, led by clinical nurse and musician Kevin O’Shanahan. They have been going strong for 10 years and they have produced two EPs. Their first album ‘For the Record’ launched at the First Fortnight Festival in January 2017 with special guest John Spillane. The album plays tribute to Claddagh Rogues co-founder Mags Kelly, who passed away in 2014, aged just 44.  For the Record explores experiences of homelessness, addiction, mental health difficulties and recovery.

James, lead singer and songwriter, spent most of his early life in prison, under psychiatric care and homeless on the streets of Cork. Fellow Claddagh Rogues founder member Mags Kelly experienced addiction and homelessness. Talking about the album, James said music continues to keep him on the straight and narrow: ‘Some tracks will pay special tribute to Mags, other will have a fresh meaning after her passing. I had no idea things would go this far. I’m the last original member of the Rogues. I have a house, a son and I want to be there for him as a father. I feel proud of myself and my family are happy too. They have been on the journey with me too. I have been a messer all my life. Things are looking up.’

Now a father of one, James said that despite a troubled past, he always loved singing.

“People always like me to sing — they’ll ask me to get up and sing a song. When I was in prison, or in hospital, I’d sing. My songs come from living in the depths and struggling, and developing the knowledge to deal with things and learning to accept,” said James.

For the Record is available at: https://thecladdaghrogues.bandcamp.com 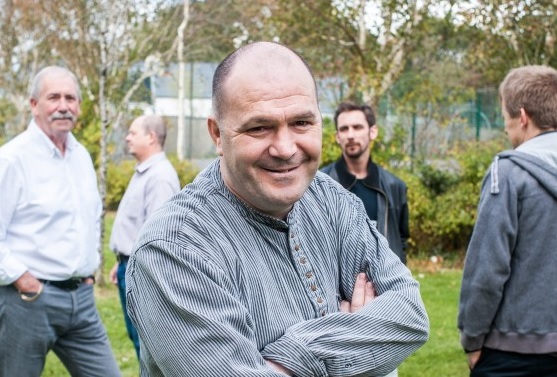 “People always like me to sing — they’ll ask me to get up and sing a song. When I was in prison, or in hospital, I’d sing. My songs come from living in the depths and struggling, and developing the knowledge to deal with things and learning to accept.”
James
For the Record is available at: https://thecladdaghrogues.bandcamp.com 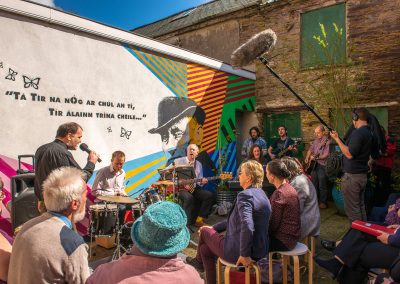 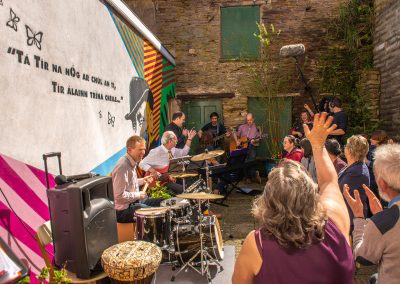 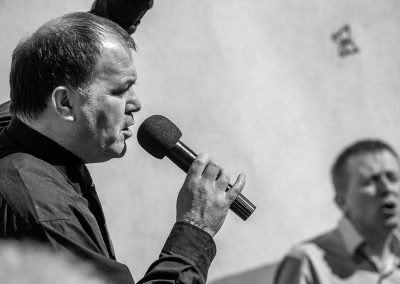 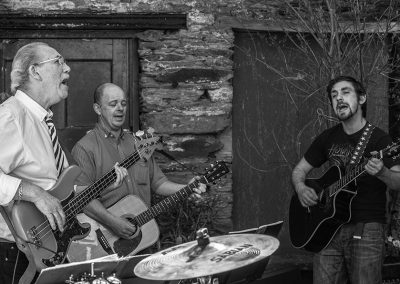 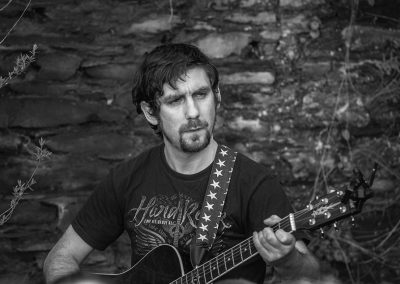 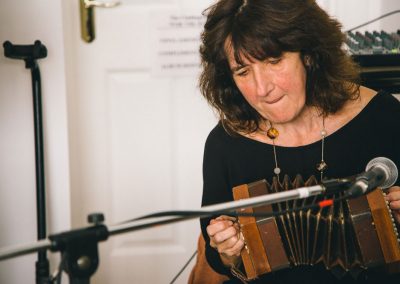 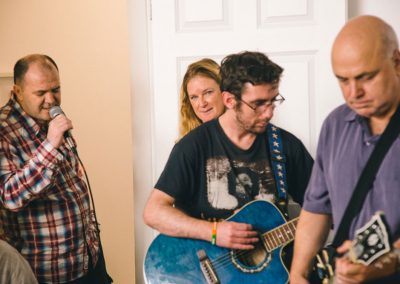 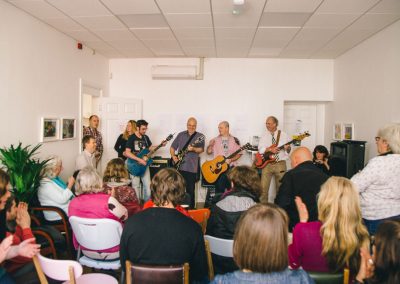 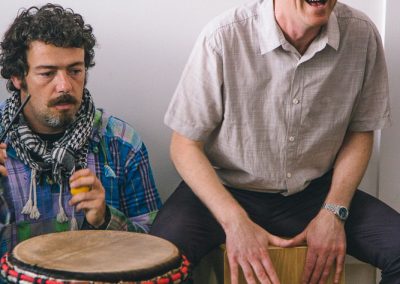 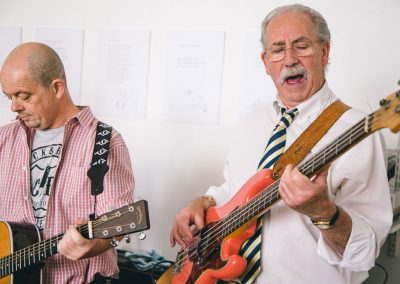 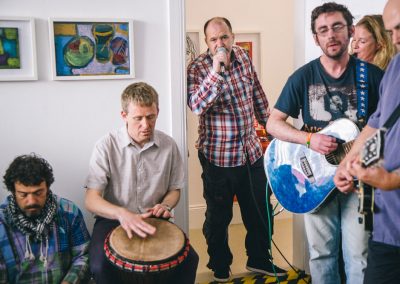 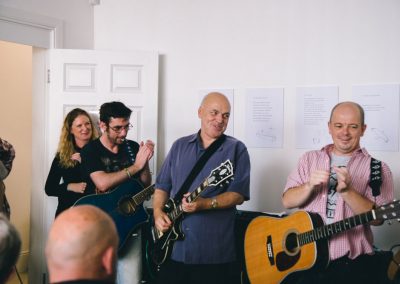 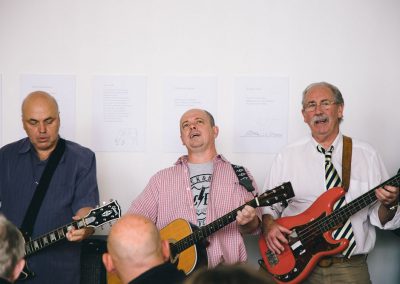 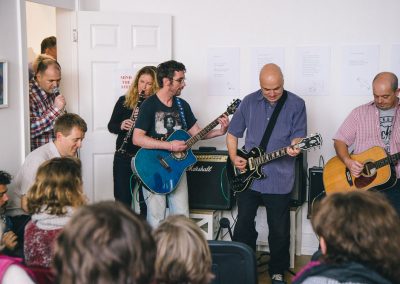 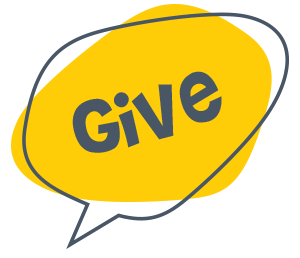 Most agree that giving to others is a good idea however giving to others has a knock on effect on ourselves by improving the givers mental wellbeing. From small acts of kindness to volunteering, giving can give you a sense of purpose, community and connectedness. Sometimes we think of our wellbeing in terms of what we have; our income, car, home or job. Evidence shows that what we do and the way we think has the biggest impact on mental wellbeing. Positive mental wellbeing means feeling good about yourself and the world around you and being able to get on with your life. Helping and supporting others and working with others towards a shared goal is good for our mental wellbeing. A 2003 study in 373 older adults found that some aspect of wellbeing were higher in those who did volunteer projects compared with those who did not. Scientists have shown that giving to others can stimulate the reward areas in the brain helping to create positive feelings. Helping others also gives a sense of purpose and feelings of self-worth. 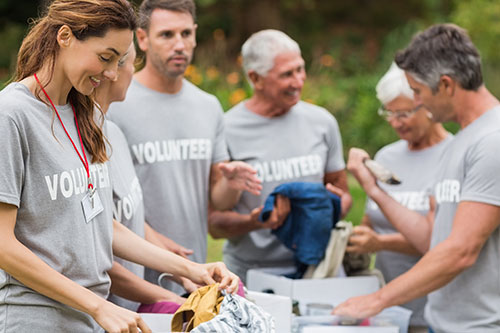 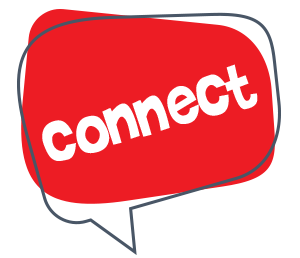 Evidence show that good relationships with family, friends, colleagues and the wider community are important for mental wellbeing.

Many of us would like to spend more time with the people who are most important to us but sometimes life just gets in the way of that. We must make time to connect with the people that matter to us. By nurturing these relationships we feel happier and more secure, giving a better sense of purpose. A 2002 study of 222 students in the US found that the happiest amongst the group had stronger social relationships than those who were less happy. Some tips to stay connected: 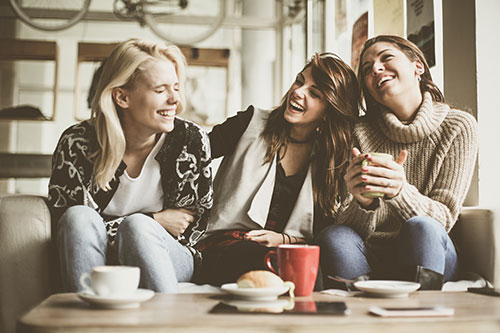 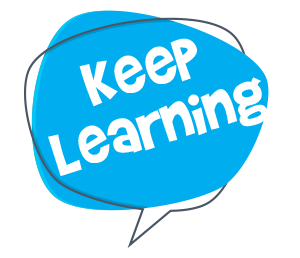 Learning new skills is both useful and it can also positively affect our mental wellbeing. Learning means different things to everyone. To some it will be a new qualification and to others it will be learning a new recipe in the kitchen.

Learning new skills is both useful and it can also positively affect our mental wellbeing. Learning means different things to everyone. To some it will be a new qualification and to others it will be learning a new recipe in the kitchen. Evidence shows that continuing to learn throughout life can help improve and maintain our mental wellbeing. Mental Wellbeing means feeling good about yourself and the world around you and being able to get on with your life the way you choose. In 2004 a study interviewed 145 adults about learning throughout life and various aspects of their health and wellbeing. It found that people who involved themselves in more learning reported feeling higher self-esteem, a greater ability to cope with stress, and more feelings of self-confidence, hope and purpose. Setting goals and working towards them plays an important part in the way learning influences wellbeing. Many forms of learning involve contact with others which connects us to our communities and peers. 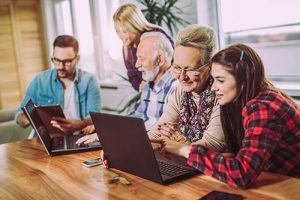 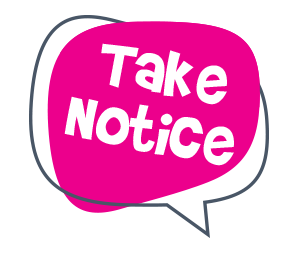 It is easy to rush through daily life without stopping to notice much. Paying attention to the present moment – to our own thoughts, feelings and to the world around you can improve your mental wellbeing.

Taking Notice is also called Mindfulness. It is easy to incorporate mindfulness into your life and can be a very powerful tool if learnt and practiced daily. Mental wellbeing means being feeling good about life and yourself and having the ability to get on with life in the way you want. Many think about wellbeing in terms of what you have; your income, car, house or job. Evidence shows that what we do and the way we think have the biggest impact on wellbeing. To Take Notice is to notice the sights, smells, sounds and tastes you experience as well as your thoughts and feelings that occur from one moment to the next. It’s easy to lose touch with the way our bodies are feeling and to end up living in our heads. An important part of Taking Notice is to reconnect with our bodies and the sensations they are experiencing. It can be something as simple as the feel of your knife and fork in your hands. Most of us have issues we find hard to let go of and mindfulness can help us deal with them more productively. Awareness of this kind also helps us notice signs of stress or anxiety earlier and helps us deal with them better. 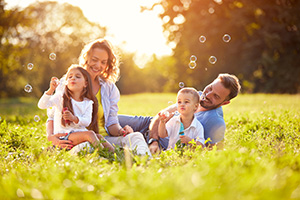 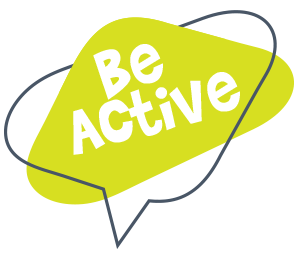 Mental wellbeing means feeling good about yourself, about the world around you and having the ability to get on with life in the way you want.
Being active doesn’t mean you need to train for a marathon. You need to find physical activity that you enjoy and can fit into your daily/ weekly routine. This may be a daily walk to the shops instead of taking the car, a weekly gardening session, some yoga, swimming or a weekend walk.
Scientists confirm physical activity can help maintain wellbeing and good mental health in a number of ways:
Physical activity helps with mild depression. Evidence shows it can protect people against the onset of depression and anxiety.
Physical activity causes a chemical change in the brain which can help change our mood.
Physical activity brings about a sense of greater self-esteem, self-control and the ability to rise to a challenge – all of which help improve wellbeing. 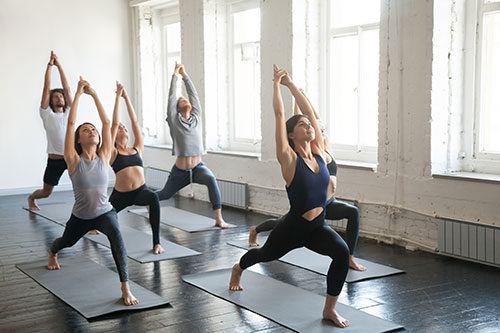